Sitting in a silent room of strangers, Steven Gerrard’s delivery was deafening to those listening intently inside as much as those jubilantly spilling out on to the streets and stands.

It is still within the fledgling hours of his Rangers managerial tenure when the question is put to him about his message to the Rangers fans.

The former Liverpool captain holds his breath briefly, before finding a two-word reply. It was all that was needed. “Let’s go.”

Back in May 2018, it was a bold statement from the man and the club given the reality facing the 37-year-old rookie manager. Celtic’s vice-like grip of Scottish football had strangled any life out of any title race for many a year.

Brendan Rodgers was leading an almost inevitable march to a fabled 10 championships in a row. While at Ibrox, interim coach Graeme Murty had just been relieved of first-team duties after a turbulent spell in the wake of Pedro Caixinha’s exit.

Over the forthcoming seasons, Celtic’s titles kept coming. One, then another. But progress was made by Gerrard, supplemented by quantum leaps in Europe that took Rangers from Caixinha remonstrating with fans in a Luxembourg hedge to the Ibrox side marauding into the Europa League knockout stages.

But this term, the young manager has come of age. The 10 has been halted, a craved league title delivered, and a board’s belief validated in a swashbuckling season.

“He took on a very difficult job,” Gerrard’s former Liverpool and England manager Roy Hodgson told BBC Scotland. “Especially to try and break the dominance of Celtic over the last few years.

“He’s succeeded beyond anyone’s expectations or what people had the right to expect. He’s done that by bringing a lot of very good leadership and managerial skills to work.

“So I’m not at all surprised. I can’t congratulate him enough for taking on such a difficult job and succeeding so brilliantly with it. It’s been spectacular.” 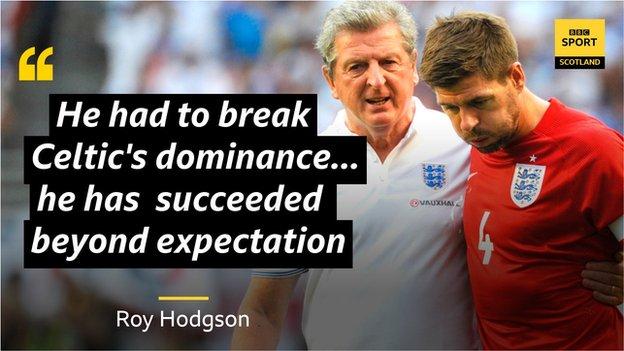 It says much for Gerrard’s standing and his relationship with the Ibrox hierarchy that he has been at the club long enough to steer the balance of power back across Glasgow.

In his first term, Rangers finished nine points behind Celtic; that chasm was 13 when the league was called early last year. Only one appearance in a domestic final from four attempts added to his cause.

“I knew what I was signing up for,” Gerrard, the club’s longest-serving manager since Ally McCoist, told the Robbie Fowler podcast last month. “It was nothing we were going to change overnight.

“The key was the conversation I had with the chairman, the board and the managing director to say ‘Look, let’s be realistic. Where are we as a club? How big is the gap, what is going to take to bridge it, how long have I got’.

“The key to it all is that backing, because they’ve been true to their word.”

European performances not only provided flickers of hope for Rangers, but also suggested that Gerrard’s credentials as a player were transferrable into the dugout.

Rapid Vienna, Porto, Braga, Galatasaray, Standard Liege, Lech Poznan have all been beaten under the former Champions League winner, and credible draws have been claimed against Feyenoord, Benfica and Villarreal, too.

It was in the European arena that Gerrard’s leadership qualities were validated for Hodgson. In 2010, an inexperienced Liverpool trailed Napoli at Anfield in the Europa League. The captain was rested in the first half, but promptly made his mark.

“He changed the game single-handedly,” said Hodgson of Gerrard, who scored a second-half hat-trick to clinch a 3-1 win. “I thought at the time ‘this is what truly great players can do’. You can ask them ‘help me out and turn this around for me’ and they go on the field and do it.

“He had that determination, that is always necessary, to make sure you can bring of your talents for the team to bear and that those around do the same.

“It was very obvious to me when I met him for the first time that he was a man who had true leadership qualities and class. Someone who had deep knowledge of the game, not just in his own role as a midfield player but how all the pieces of the jigsaw fit together.”

Finally in a league of his own

In the aftermath of the 3-0 victory over St Mirren on Saturday, Gerrard poked his head out of a narrow dressing room window as the reality that a 55th league title was inescapable set in.

So, too, was the personal landmark he had achieved.

The smile on his face was no doubt triggered by Rangers’ success, but it fulfilled a career-long dream of becoming a league winner that evaded him as a player. Two FA Cups. Three League Cups. A Champions League. A Uefa Cup. A Super Cup. And now a Scottish Premiership.

“It will mean a lot,” said Hodgson. “When you have a career like Steven Gerrard’s it suggests the absence of a league title will somehow impact upon it. I find that a little hard to embrace.

“I know he would have desperately loved to win the title with Liverpool and he would have been overjoyed to have been part of the Liverpool team that has done so brilliantly in the last few years, but he didn’t have the good fortune.

“But he has had many other successes, not least of all winning the Champions League, which I’d say is every bit as comparable as winning a league title.

“What this league will mean to him is that when you take on a job like the one at Rangers where expectation is enormous and the rivalry with Celtic is second to none in the world, to have beaten them this season into such a comfortable second place must be an incredible feeling.”

‘The world is his oyster’

It would be naive to think Gerrard’s achievement in Glasgow, coupled with remarkable consistency in continental competition, would go unnoticed.

A Liverpool academy coach prior to his unveiling at Ibrox, the current struggles of Jurgen Klopp’s Premier League winners offers an easy conclusion to jump to about where the Liverpudlian will eventually end up.

However, Gerrard’s demeanour and narrative would suggest any departure from Glasgow will not be forthcoming any time soon. The chance to build on their domestic breakthrough goes hand in hand with the lure of potential Champions League football that lies just two qualifiers away.

But Hodgson has no doubt about what Gerrard’s managerial future will hold for him.

“Now he knows that if he can bring his skills in management to bear and win a title at Glasgow Rangers, you can go anywhere in the world and feel very comfortable with what you believe in as a manager.

“He could be whatever he wants. He’s obviously got the necessary talent and skills to be a top-class manager at the highest level. In that respect, the world is his oyster.

“His record as a player and reputation as a person, captain and leader, will make him an unbelievably attracted proposition for any club who is looking for a manager in the future.

“If it’s his ambition is purely ‘One day I’d like to be Liverpool manager’ then I would think what he is doing at the moment, and what he has to offer, will always put him in a good position when such a job became available.”